James and Laura Dunsmuir thought big when they decided to build a retirement home in Victoria, BC, in 1908.

It wouldn't be a typical family home; James envisioned a grand residence where his wife would entertain Victoria society while he could fish, hunt and play the role of gentleman farmer.

Inspired by medieval castles, Hatley Castle was designed to impress in every way.

The other castle in the family

Hatley Castle wasn't the only castle in the Dunsmuir family.

James's father, Robert Dunsmuir, purchased land in the Rockland area of Victoria in 1887 and began the construction of his magnificent home, Craigdarroch Castle. Positioned at the top of a hill and more immense than any other private home the city had ever seen, Craigdarroch was to be a dazzling show of Dunsmuir wealth.

However, Robert died in 1889 without seeing the completion of the castle. The task of finishing the project fell to James and his younger brother Alex; when completed, Craigdarroch Castle would be home to their mother and unmarried sisters.

The vision for Hatley Park

Determined to avoid construction delays like at Craigdarroch Castle, James spared no expense at Hatley Park and hired over 100 builders, 25 detail carpenters and 60 stonemasons to ensure the job was completed quickly. Construction of the Hatley Park home took just 18 months.

Dunsmuir knew what he wanted for the exterior of the estate. The industrialist, heir to a family fortune and the former premiere of British Columbia, told Maclure to build a home that looked like a proper castle. He envisioned a Norman tower flanked by Tudor-revival wings.

Laura wanted a home where she could entertain in style, with enough space to accommodate her family and staff. She envisioned a layout similar to the house they lived in while James served as lieutenant governor of British Columbia. That house, called Government House, had been designed by Maclure and the renowned architect Francis Rattenbury. It was destroyed by fire in 1957.

"It doesn't matter what it costs"

According to an apocryphal tale, it's been suggested James Dunsmuir said to Maclure: “It doesn’t matter what it costs, just build me what I want."

Maclure, who helped design Government House in Victoria, enthusiastically complied. At 200’ x 86’ x 82’, the home at Hatley Park was the largest private residence on the west coast at the time. 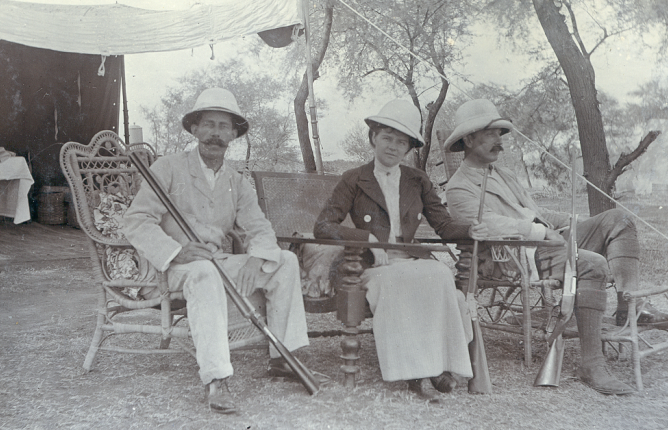 More to the story in our archives

The Dunsmuir and Hatley Park archival collection has more than 2,000 historic photos and ephemera. Visit our online archives to learn more stories.

Whether guests to Hatley Castle arrived by horse and carriage or motor car, the large, covered porte-cochère (carriage porch) at the main entrance allowed passengers to disembark while being protected from the elements. Stepping stones placed across from the entry made it easier to get off and on a horse.

Medieval busts on either side of the door indicate the gender distinction of the first floor wings: the east side was the ladies’ wing; the west was the men’s.

Don’t miss the elegant little bronze doorbell figure of a whimsical seated angel, which has an Art Nouveau influence. The electric doorbell signalled more than visitors; it was a mark of wealth to have electricity throughout a building in 1910.

Hatley Castle's great oak doors open to reveal the Elizabethan, or Tudor Revival, grand hall. It was built to impress, with half-panelled plaster walls, vaulted ceilings and heavy oak beams. A pattern of pointed arches runs up and down the banisters, across the minstrel gallery and above the stairwells.

Rose-coloured sandstone used for the carved fireplace came from Flagstaff, Arizona. It’s one of seven wood-burning fireplaces on the castle’s first floor. Each was there purely for show; the home was kept warm with a steam-based central heating system.

Just beyond the grand hall, the 1,200-square-foot Greek Revival drawing room was where Laura Dunsmuir entertained her society friends. Matching ornamental mirrors hang above a pair of Italian black marble fireplaces, standing face-to-face at opposite sides of the room. With soaring 16-foot ceilings, the space has been described as being the size of a modest three-bedroom home.

Two sets of double French doors lead out to the terrace, a perfect place to enjoy the spectacular view of the grounds, Esquimalt Lagoon, the Straits of San Juan de Fuca and the Olympic Mountains in the distance.

The main bedroom in the centre of the house had a bed chamber of 480 square feet with a separate dressing room on the right hand side and a boudoir on the left. In larger Victorian homes, a boudoir was a lady’s private sitting room and would have included a daybed, sometimes referred to as a fainting couch. By the Edwardian era, and particularly in grand North American homes like this one, the room was more commonly used as a dressing room. The layout of these male and female dressing areas mirrors the male and female busts at the entrance to the home.

In the original design, the fireplace of the main bedroom was in an interesting position. With closets placed behind it, the fireplace needed an extended flue to join the main chimney stack in the centre of the house.

The room was originally decorated in pink and white with hand painted wallpaper depicting delicate pink flowers and butterflies.

Only six of the Dunsmuirs' 10 children were still living at home when the castle was completed in 1910. The four east-wing bedrooms and one of the west-wing rooms were the children's. All of them had decorative plaster ceilings and lovely views of the gardens and lagoon.

Youngest daughter Dola, who was seven when the family took up residence, had the bedroom nearest the nurse’s room at the southeast corner of the second floor. Pink Rookwood pottery tiles surround the fireplace in her room.

The four remaining west-wing rooms were used as guest rooms and a dressing room.

Maclure's touch is found in the Arts and Crafts sensibilities throughout the castle, such as the hand-crafted wood and stone carving inside and outside and the choice of wood as the main decorative feature on the walls and in furnishings. Maclure even designed some of the furnishings for the home. Sadly, those pieces are long gone.

Following the Arts and Crafts style, the colour palette in Hatley Castle is heavily influenced by the natural world, especially organic tones of brown and green. Blues and reds were also acceptable, provided they had a "dusty" or muted look.

Also significant is the brighter, more open feel of the home compared with the dark stuffiness of the immediately preceding Victoria era. This is particularly clear in the drawing room, which was painted white with gilt relief details. The room was enhanced by soft-green furnishings and plenty of plants and cut flowers. 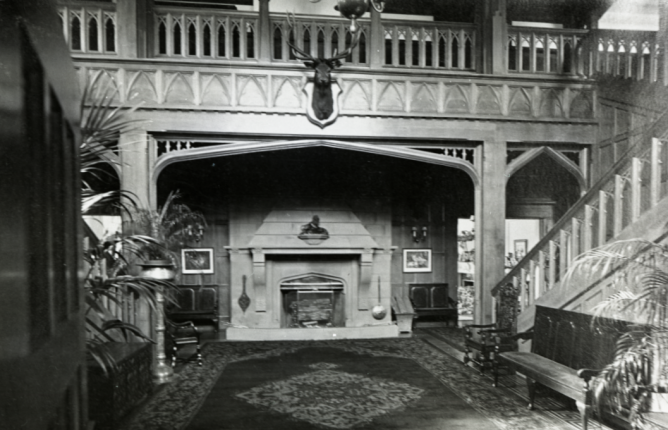 You're welcome to wander the beautiful grounds on your own. Or, join us for a guided tour, and you'll enter the first floor of Hatley Castle.

Hatley Park was a like a small city. The 1911 census lists more 100 people living on the site, from groundskeepers to domestic servants.

The many Chinese labourers employed on the estate lived in a self-contained community within the property, some distance from the main residences.

Some maids and staff lived in the castle, others nearby. The head coachman and chauffeur had homes on the estate at the stables and garage, respectively. The head gardener had a residence near the conservatory, and the estate manager lived in the gatehouse, now situated in Belmont Park, an area of Colwood comprising military housing east of Hatley Park.

The house built, the Dunsmuirs turned their attention to the formal gardens and adding other buildings to the property.

Like Hatley Castle, the grounds were intended to make a statement about wealth and status. The Italian garden built to the west of the castle in 1913 was designed by noted Boston landscape architects Franklin Brett and George D. Hall. Both had worked for Frederick Law Olmsted, often called the founder of American landscape architecture.

The stables and mews followed in in 1914.

The lawn around the castle marks a transition from the wild old-growth forest on the property to the meticulously landscaped grounds.

The Neptune Stairs rise from the castle's porte-cochère at the front. In the fountain court, Neptune’s statue is centrepiece.

Construction of the farm and service buildings on the estate continued well into the mid-1910s. 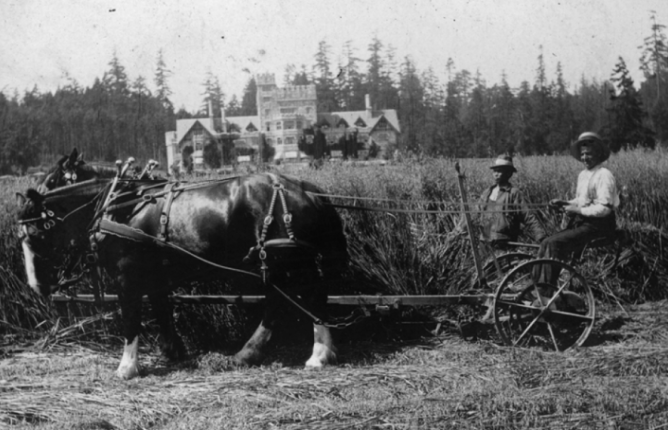